Scripts can automate shelf processing with XPace. Routine activities can then be carried out at the touch of a button, and entire workflows for updating shelves and reporting become child’s play with a good script.

As usual in programming, the first step in this article is to show the output of a simple text: The character string “Hello XPace World” is to be output on the XPace console.

Create a text file named HelloWorld.js somewhere on your hard disk. Make sure you have the correct file extension .js! Our suggestion: First create a folder named scripts in the docroot folder of your XPace database, which you can use for all your scripts in the future.

Edit the newly created file with a text editor, e.g. Notepad (Word is not a text editor!). Insert the following source code (without the line numbers):

The comment line // write text to console: is not important for the execution and can be omitted if desired. 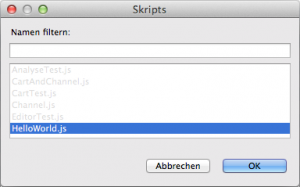 You can now install the new script in XPace, using

and start it with

The console displays the following output

Congratulations – you wrote and executed your first script!

Of course, this is only a first introductory example of how to create, install and execute an XPace script. Truly productive scripts that automate planogramming access the objects in a planogram, call up reports and analyses, filter products, change product placement and much more.

The Planogramming API is documented in the XPace Scripting manual.

XPace Space Management is based on a series of concepts that cover all steps of planogramming, from shelf planning, shelf evaluation, versioning and restructuring to documentation – even for complex, non-linear situations. Read More about “Shelf Planning: The Basic Recipe”…